Sometimes despite your very best efforts, things do not work out as planned, and the past couple of weeks have proved to be the case!

Here at Olive Tree Farm we all have our roles. With nine of us here most of the time, there is a lot to do. Nine in a normal household is a lot of people, but nine here, plus all the animals on the farm, our aviaries, fish pond, fish tanks and 6 dogs takes work!

Growing, or trying to grow your own food on top of all the above can be quite exhausting. All the planning, care and attention, trying to get things right and keeping on top of it all, never ends. On occasions, we have some fantastic results and then something goes horribly wrong. In this case the “horribly wrong”, is our rabbits.

Ben has taken pride in his rabbit breeding programme. They are always beautifully cleaned out, well fed, are exercised and given fresh water daily. Yes, they are for the table, but that does not mean we don’t feel affection for them. When a couple of weeks ago Ben went up in the morning to feed them, one was lay down, stretched out and was stone dead! He couldn’t understand what had happened. The previous day it had looked fine; perhaps it was slightly more lethargic than others and was last to get over to the food, but the weather had been fairly hot. It had no wounds, so hadn’t been fighting, it didn’t make sense. The following day another was looking a little lethargic, and yes, you guessed it, the next day we found this one in exactly the same position and it too, was dead.

We weren’t sure if it could have been the food as we had bought a different brand than usual so we went and found a bag of our usual feed and started to use that. Again, a couple of days later, the same thing happened, only this time there were 2 dead. At this point we did a bit of research, there had to be something wrong with the actual rabbits, a disease or something? With the rabbits being bred for the table, the thought of this was quite disconcerting, we need fresh healthy food and we were also running out of places to bury them. Throwing an animal in the bin, after all the work that has gone into them to get them to this stage, is very disheartening.

Our research brought a few things to light. We came across an article talking about an illness, which apparently, has killed off rabbits in the thousands. Some breeders that breed in vast numbers have lost their whole stock within days. It seemed from the symptoms to be Rabbit Viral Hemorrhagic Disease (VHD), which is a highly contagious disease caused by a calicivirus that affects only rabbits of the Oryctolagus cuniculus species. In the USA for example, hares, jack rabbits and cottontails aren’t affected as they are a different species. In Europe however, pets and wild rabbits are.

We quickly contacted the vet to find out what we could do about it and how we could prevent it from spreading. We were told it was common in this area and he would come up the following day to take a look at them and do the blood tests for the goats at the same time. By the time he came the next day however, another three had already died. Our suspicions were confirmed, it was VHD and there is no treatment. Once they have contracted the virus, they die within 48 hours. There is a treatment that can be given to an unaffected rabbit in injection form and he recommended we give that to the parents as they are not going to be for eating. The youngsters however which are for food you cannot treat. They would either get through or die.

Although the subject of this month’s article is a sad one, we hope that for anyone that either keeps rabbits as pets, or breeds for food, it might help should this happen to you. The symptoms you need to look out for are:

The virus can be spread via rats, mice, wild rabbits and even insects and it is impossible to protect the rabbits unless they are kept completely indoors, which ours are not. 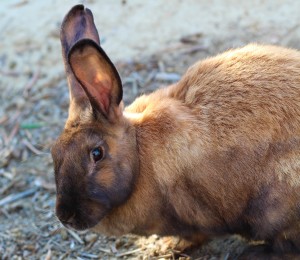 So, there you have it, we ended up losing all the youngsters, over 20 have died. The adults are still looking well though, so we are hoping to be able to start our breeding programme once more after having scrubbed and disinfected all the cages, bowls and nest boxes and moved them to a new space. We will see!